Steeped in oral history and mythology, the play depicts Queen Pokou as she leaves what is present day Ghana and travels west into Ivory Coast. According to oral tradition, Pokou and her people were forced to leave Ghana as a war of succession takes place and the pretender to the throne is murdered by her own uncle. Historical documents show that there was the exodus of people towards the west, but a question remains unanswered: What exactly occurred during this exodus?

The legend speaks about one large river, which barred the road, and to cross that mighty river with her people, Pokou had to make a great sacrifice: to cast her child into the waters of the river in order to save her people.

This new adaptation challenges the audience to look afresh at a legend that has developed through oral history – from different aspects, and seeing Pokou in a narrative punctuated by the perspectives of many characters. Queen Pokou re-examines various versions of the story through the use of fantastic dramatic poetry, live music and StoneCrabs’ strong, clean award-winning aesthetics. 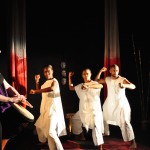 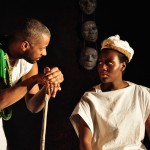 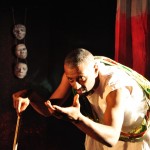 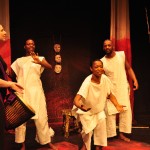 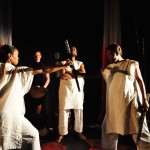 “Karlina Grace is an exceptional dancer but all three actors are accomplished movers and give especial charismatic electricity to the choreography of Leigh Tredger. This, the first UK production of this story is directed by Franko Figueiredo, and he has succeeded in engaging the audience in the journey and experience of Abla Pokou and her followers.” – Aline Waites for Remotegoat.co.uk

“African insights with imaginative dance, drama and music” – The Stage

“The play is an emotional insight into the story of a strong woman in a difficult and heartbreaking situation…it is refreshing and powerful. It is definitely worth catching (it)” – ayoungeraudience.com

The Production was presented in association with the Albany and it toured in London and the South East in 2011 & 2012.