Skin in Flames by Guillem Clua

Skin in Flames is an award-winning political thriller about a famous photojournalist who returns to the country where his career was launched during a brutal civil war. One of his photographs (of a schoolgirl flying through the air after a bomb explosion) has since become a world-renowned icon of war, violence, and innocence. While the photograph has become a household image, the girl has never been identified. Twenty years later, the photographer returns to the infant’s democracy to receive a prestigious peace award, but first must be interviewed by an ambitious young woman whose story seems eerily familiar. 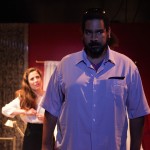 ✭✭✭✭ “A gripping political thriller… everything about directors Silvia Ayguadé and Franko

Figueiredo’s production – the lighting, the music, the staging – combines to create a masterpiece

of suspense that keeps the audience on the edge of their seats from start to finish.” – LondonTheatre1

✭✭✭✭ “This is a tough, uneasy but richly rewarding night in the theatre” – BritishTheatre

anxiety in this ticking time bomb of a show.” – LDNCard

“Cold and gruelingly suspenseful. It jabs at the audience like a knife in the dark” – LDNCard

structure well… Bea Segura is a commanding, strident presence as the disillusioned reporter with a

hidden agenda, but the real victim of this conflict is embodied in Laya Marti’s tortured, tormented

else to look, no escape from these inconvenient truths…Marti is brilliant at conveying the

his first objective of making us stop and think.” – BroadwayWorld

patterns, an untidiness that reflects the national situation and a suggestion of corrugated iron

made elegant to hint at conflict veneered over.” – BritishTheatreGuide

fervent in their expressions of different kinds of victimisation and survival strategies.” – The Arts Desk

situation…[Segura’s] central monologues were emotionally electric and charged with suspense,

sorrow and atmosphere. One in particular really took my breath away – two minutes where the

spotlight shined on her (literally) and the music grew and developed to add pace to her speech, all

combined into a colourful picture for the audience to experience.” – A Younger Theatre

Skin in Flames was a co-production between StoneCrabs Theatre Company and Bots & Barrals in association with the Park Theatre. Skin in Flames was supported by The Royal Victoria Hall Foundation, LondonSchool Trust, The John Fernald Award, Istitut Ramon Lull and Catalans UK.

“Stonecrabs delivers a production which is full of wit, elegance and intelligence”