The Burial, by Bola Agbaje

StoneCrabs Theatre Company and The Albany Theatre, Deptford present the World Premiere of Olivier Award Winning Playwright Bola Agbaje’s latest play. The Burial is a lively new satire which explores how the conflicting traditions and religious tensions of one family reveal an unlikely respect for their Nigerian and British-Nigerian cultures.

Funmi has it all: a career, doting husband and a comfortable life in London… until the day her father dies and his two Nigerian wives arrive in a flurry of designer shoes and polished fingernails to clash over his burial arrangements. Born a Muslim, married a Christian and with new-found Buddhist beliefs, Funmi is forced to confront the past and her own faith to end the war over her father’s body. 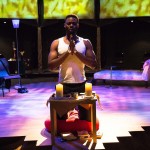 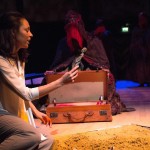 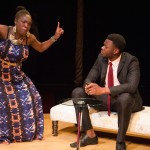 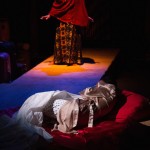 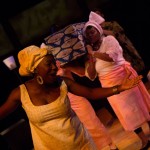 “Fantastic, polished design and an excellent script with a great balance of drama and comedy” – Everything Theatre

“The Burial’ is brimming with flair” – Time Out

“Performed in the round, Franko Figueiredo’s production is filled with music, the play offering a rich dream landscape, peopled with spirits, full of chanting and drumming” – The Stage

This production was presented as a co-producion with the Albany, Deptford and supported by the Arts Council of England, Unity Theatre Trust and The British Nigerian Education Trust.